Mark to Market – The Forest and the Trees

With a 24/7 news cycle populating our smartphones and breaking news throughout the day, investors may feel they need to check their portfolios continuously. While investments in Real Estate, VC or Private Equity don’t provide daily updates to valuations, and investments in private markets are in general, opaque, the transparency of public markets can be a double-edged sword. Marking-to-market, sometimes leads investors to focus on noise and short-term market oscillations instead of long-term outcomes. This unfortunately often leads to investing based on market cycle, with more money going in at tops, and out at bottoms.

Compounding the distraction of short-term fluctuations are investors’ shifting attitudes towards industries and businesses. These can shift from euphoria, believing the potential is almost limitless, to extreme skepticism where investors want to “see it to believe it”.

When these two forces coincide, businesses that are creating inherent value at high rates can spend months or even years without seeing this value recognized by the stock market. I have seen several examples of this throughout my career. This letter will stick to facts on a few case studies. It will also be succinct, so it doesn’t fully capture the wide extremes and reverses in public sentiment on these businesses. For example, in one of these cases one analyst had a “sell” rating on a stock when it was at $200 and then upgraded the same stock to a “buy”1.5 years later when it was already trading above $700. When the stock was at $200, daily headlines in mainstream media attacked the company’s strategy, management ability and prospects. That all reversed when the stock was at $700 and the management team graced numerous magazine covers – faces that were vilified just 18 months prior.

Let’s start with Amazon. If you had the foresight in 2003 to conclude that this then 7-year old company (founded in 1996) had a brilliant strategy, great management team and a massive opportunity ahead you would have been out of luck. For the following 6 years, the company’s stock was mostly flat (see Fig. 1).

Depending on where you bought and when you marked your book, you could be lodging somewhere between a loss of about 10% per year to a gain of about 7.5% per year. If you were a fund manager, you would probably be facing redemptions as people would be complaining about your poor returns.

After 5+ painful years with mediocre returns on your Amazon shares, you may have concluded that Mr. Market was correct, and you had made a mistake. After all markets are supposed to be efficient right? If you had capitulated, you would have massively missed out on your original correct investment thesis. 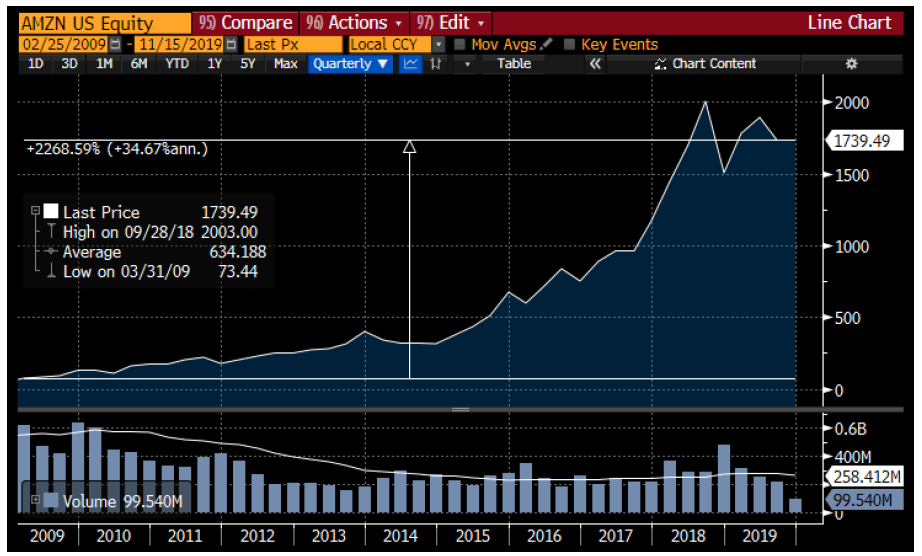 For the following 10 years Amazon stock would go up by about 2200% for an astounding average annual return on the shares of 34.7% (see Fig. 2). After 6 years of being looked down as a zero in terms of investment prowess, you would now may be lauded as a hero. 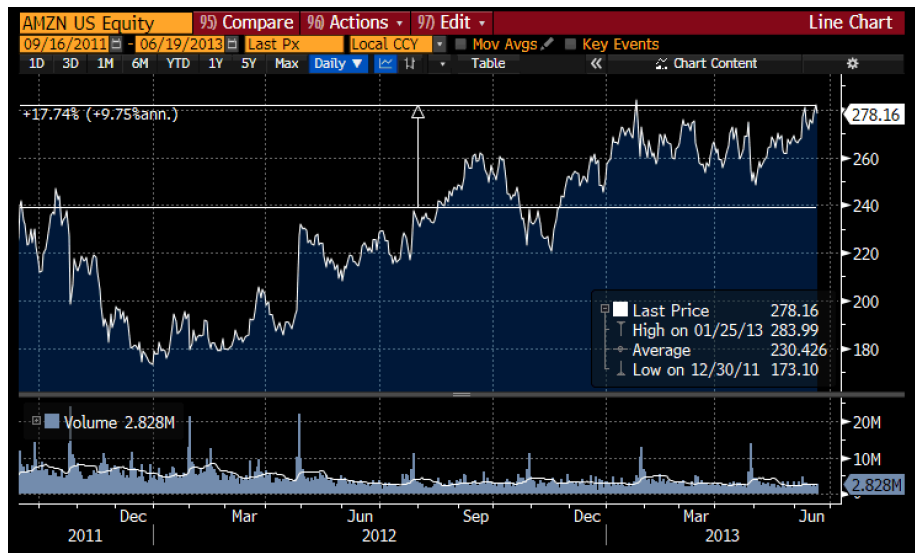 But, then again, maybe not. You or your investors could have lost faith based on the mediocre 2 years between 2011 and 2013 (see Fig. 3). Lots of news during that period casted Amazon’s model as broken and most sell-side analysts believed they couldn’t keep their high growth rates while keeping their margins. Mark to market could have shaken your belief then, and made you sell at the wrong time.

Two years is a long period for investors to withstand. Some Hedge Fund investors ask for weekly fund performance figures in order to keep abreast of all the oscillations. This can be an important portfolio risk mitigation exercise. But in the process, it may create the conditions to miss the big forest opportunity which in almost all cases has necessarily some controversy around it (see Fig. 2 again where the period depicted in Fig.3 registers as a mere blip). 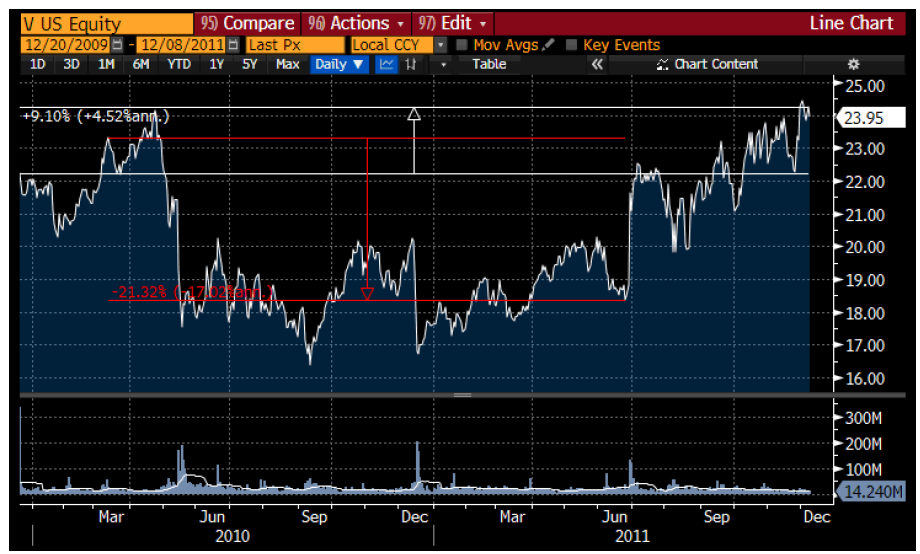 I witnessed a similar situation with Visa. For about two years, the stock went nowhere, while the S&P500 and NASDAQ indexes rallied in the wake of the 2008 financial crisis.

Investors were worried about potential implications of the Dodd-Frank Act enacted after the Financial Crisis. In particular, the Durbin Amendment tasked the Fed with regulating the interchange fees on US Debit transactions. It is important to note that Visa doesn’t receive any portion of the interchange fees. Nevertheless, investors worried banks could ask Visa to share the pain for their loss of this revenue. This fear proved unfounded.
In the meantime, during these two years, Visa grew its revenues at a 15.3% CAGR and its operating income at a 24.2% CAGR. Despite that, as Fig.4 shows, the stock went nowhere for two long years.

As in the case of Amazon, these facts were accompanied by a large portion of sell-side analysts downgrading the stock to hold or sell ratings and negative media coverage. 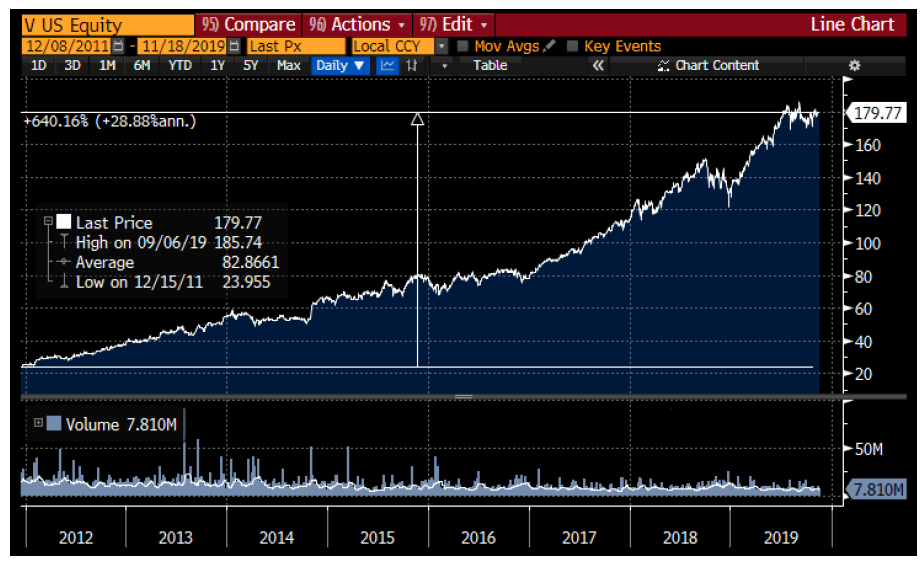 Again, capitulating to Mr. Market would have proved to be the wrong decision. In the next 8 years, Visa’s stock went up by about 640%, for an average annual return of almost 29% (see Fig. 5). 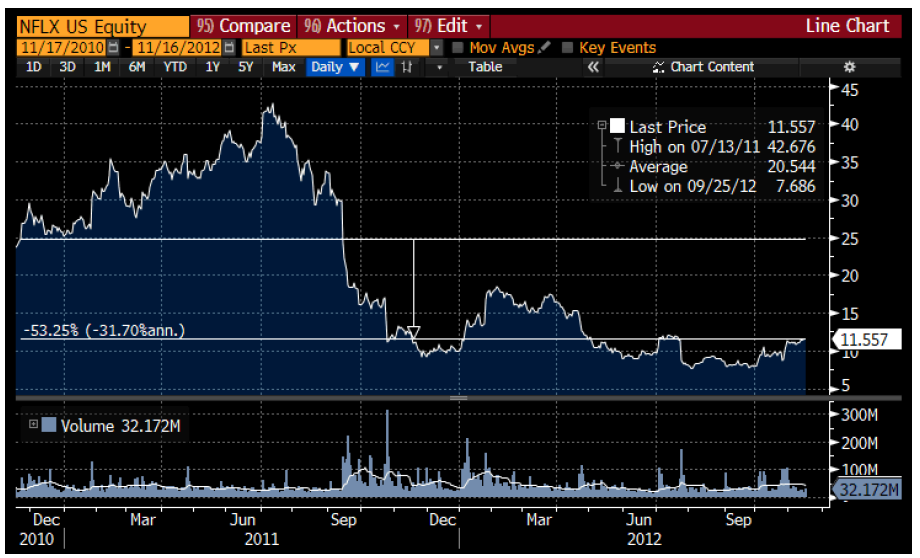 There are times however, when Mr. Market is rightly concerned about real business and strategic issues. In 2011, Netflix decided to disrupt itself and divide its business into a streaming offering while keeping its DVD by mail core business as a separate offering. To build its streaming content library, Netflix announced it would invest more than $1Bn in content acquisition rights.

While sales continued growing at a 29% CAGR during the 2010 to 2012 period, operating profits declined by more than 80% due to the content investments. Investors grew concerned about the business’ prospects and the stock more than halved during the period (Fig. 6).

However, customers responded well to the streaming offer, and Netflix gained significant share of entertainment hours and added tens of millions of new customers around the world. The strategy shift proved highly successful and the stock went up more than 2400% in the following 7 years for an astounding 59% annual return rate (see Fig. 7). 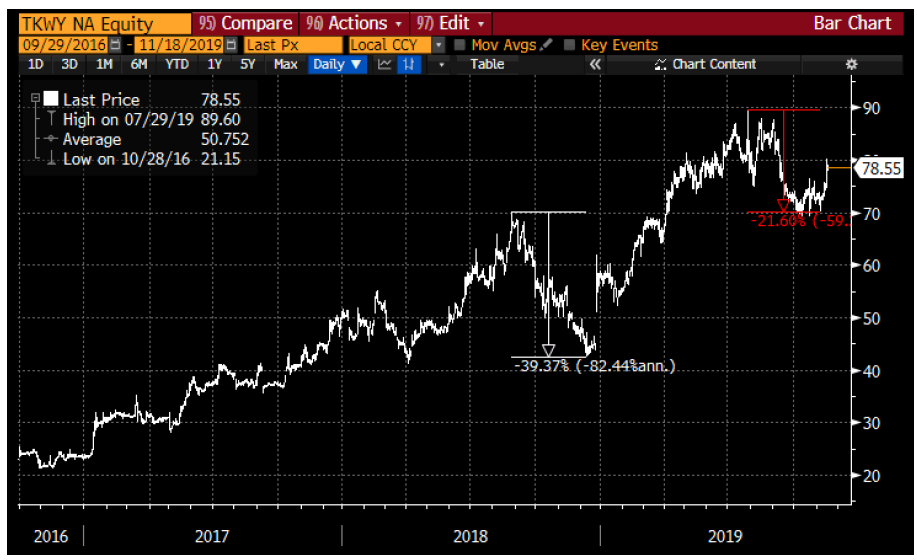 All of these case studies are intended to demonstrate how even highly followed Mega-Cap businesses can have their stocks trading away from business fundamentals for months or even years. When looking at Somar’s monthly performance, or even our performance over 1 year, it is important to note that the underlying businesses could be thriving despite their stock prices [and consequently, Somar’s short-term performance] not reflecting it.

As an illustration let’s look at our investment in Takeaway.com. We wrote about our thesis in this business in August of 2018. Since then, the business has performed quite well:

Despite these strong developments we have had to endure some volatile and adverse movements in Takeaway.com’s share price. The stock declined by almost 40% in the last 4 months of 2018. This was a strong contributor to our drawdown last year. Recently, the stock has declined more than 20% over the past 3 months. This seems related to the fear of competition by new well-funded entrants with delivery-only models, even though they have extremely low shares in Takeaway.com’s core markets and appear to be retreating from these markets.

While we would all prefer a smooth evolution of the stock price that reflects the inherent value being created, the stock market is highly volatile and, in our opinion, highly inefficient, particularly for underfollowed names that are not part of major market indexes. These discrepancies create opportunities as the case studies above suggest. We remain focused on following our investments to ensure that inherent value is being created and that our companies continue to wow their customers, take market share and build a profitable business. We know that if this continues, Mr. Market will eventually catch-up.

Looking at the evolution of the inherent value creation graph we shared with you in the last letter and reproduced on Fig. 9 we are highly confident that your commitment to Somar will be well rewarded. 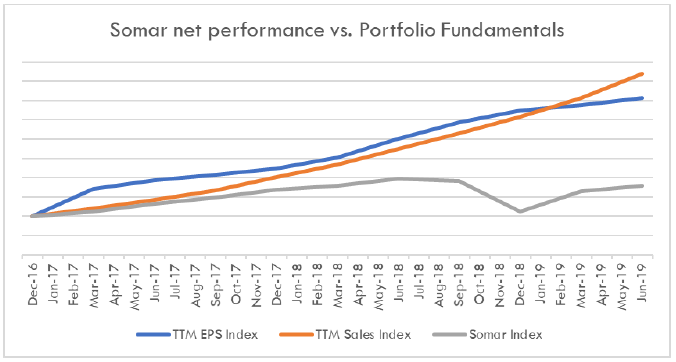 Disclaimer: This website is for general information purposes only and is not intended to be, nor should it be construed as investment advice, nor a solicitation or offer to buy or sell any securities, related financial instruments, or  interests in the Somar Master Fund, LP (the “Fund”) or its feeder funds. The information contained herein is not complete, and does not contain certain material information such as disclosures and risk factors about the Fund or its feeder funds. Opinions expressed are current opinions as of the date of this material only and are subject to change without notice.Hedge funds: (1) often engage in leveraging and other speculative investment practices that may increase the risk of investment loss; (2) can be highly illiquid; (3) are not required to provide periodic pricing or valuation information to investors; (4) may involve complex tax structures and delays in distributing important tax information; (5) are not subject to the same regulatory requirements as mutual funds; and (6) often charge high fees.

Image by Picography from Pixabay