On its surface, successful shorting may seem like a simple mirror image from buying a stock: you find a company whose moat and financials are being impaired[1], short it at an unsustainably high valuation, wait and then cover your position at lower price to lock-in your profit.

However, while necessary, the conditions above are not sufficient for success in shorting. Timing and position sizing are also crucial for short profitability. This, together with the fact that over time economies grow and businesses accumulate profits, makes successful shorting much harder than buying stocks. 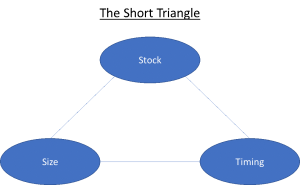 In this letter we will dive deeper into Somar’s shorting method: which we call “The Short Triangle”. (Fig.1) At Somar we believe you need to get these three aspects right at the same time to have a successful short.[2]  Let’s take each of these conditions one by one.

For a successful short idea, we need to find a company whose futures prospects are being impaired. At Somar we focus mostly on companies being disrupted (see June 2018 letter). When holders of the stock are not pricing in those threats to future profitability and cash generation in the stock we have a potentially good short idea. The question now is how much do we short?

Sizing of a short position is particularly difficult. On the one hand, the larger the initial position, the higher the profits we get when the idea comes to fruition. On the other hand, if the short position moves against you, the size of the short in your portfolio increases automatically, potentially precluding you from increasing your short position at even more attractive prices. In more extreme conditions, you may even be forced to cover your shorts at a loss because you are now violating your own risk controls.

Let’s illustrate this with an example. We want to short stock A. Our risk management rules dictate that no individual short should be larger than 3.00% of AUM. Let’s also assume we initially size stock A into a 3.00% short. Table 1 describes two potential scenarios.[3]

By comparing Tables 1 and 2 we can highlight the inherent tension between profit and risk management inherent in sizing up a short trade:

It is important to note that the risk management limits are important to prevent escalating losses on shorts whose investment thesis proves out to be wrong. For example, on Scenario 2 in Table 1, if the PM would keep the short at 3.60% (thereby ignoring the risk management rule of reducing it to 3.00%) and the stock went up a further 20%, the losses would now be an additional -0.72% (20.00% x 3.60%) rather than –0.60%.

The previous section made it clear that a short investment doesn’t tolerate dramatic adverse movements in the stock price until the thesis fruition. Therefore, timing the entry and exit points are very important to minimize the potential for forced transactions at unattractive prices for risk management.

There is a strong propensity to be “too early” in a short trade. Long investors tend to be sanguine to early indications of trouble and discount it as normal bumps in the road while bidding the share price higher. For a successful short, exercise of good judgement on the potential impact to the company fundamentals of incoming news. Then we need to decide where the tipping point lies, which will start to sow the worry among the company investors that its future profitability may not be as high as they had anticipated.

Being too early in shorts is costly and may lead to losing money on a short, even though the original thesis is proven correct in the fullness of time.

To illustrate this let’s analyze Trivago. The company went public in December of 2016. It is a travel price comparison engine mostly focused on hotels. It is a challenger, following TripAdvisor which through its rich content and unmatched review content is the market leader. To compensate for this, Trivago embarked on a massive TV advertising campaign to acquire traffic. It would then sell this traffic onto online travel agencies and hotels. Their financials showed that overall the company’s customers were paying as much for the traffic provided by Trivago as it cost Trivago to acquire. To put it simply: Trivago’s revenue matched its spend on TV Advertising. Given its lack of additional differentiated features (reviews, social engagement, unique content) we didn’t see this as a sustainable business model. In fact, the market was saying that it didn’t see any value added by Trivago but just merely a low (or zero) margin reseller of traffic.

Soon after its IPO Somar took a short position on Trivago. As can be seen from Fig. 2 we proceeded to experience steep losses on the trade as the stock doubled in the first 6 months of the trade. Investors were attracted to the company’s high growth rates and were convinced the company could continue to grow fast by adding a growing number of new users at lower average prices to eventual turn profitable. The first two quarters of 2017 showed progress on growth but not on margin. In the third quarter of 2017 the first cracks started to appear when growth faltered, and margins failed to improve.

While we recovered some of our losses in the second half of 2017 we ended up losing money on the trade overall by being too early. We were forced to reduce risk prior to our thesis being proven right.

Somar’s culture stresses the value of being honest, humble and hungry. No part of our business keeps us humbler than the short book. This is a massive opportunity ahead for us. It adds tremendous value to our investors and to our return profile. It requires flawless execution, emotional balance and strong judgement. We are heads down focused on capturing it and improving every week. We are excited by the roadmap ahead and look forward to reporting that back to you.

[1] We wrote about this in last month’s letter

[2] By contrast, the same is not necessarily true in long investments. If you buy a large position and it initially declines, its new lower size, provides you additional space to add on weakness. Also, if your initial investment is small, and the stock goes up, the new size in your portfolio is larger at the higher valuation.

[3] In all the described scenarios in this section we are assuming constant overall fund AUM throughout the period.

[4] To be clear we are able, and have, bought single long positions that are larger than 3.00% of AUM in our fund