When I first heard of Solar Energy I was 10. My uncle had just installed a solar panel in his roof and it seemed like a magical idea to me: free energy from the sun! After being educated about the high capital costs with low (and intermitent) energy yield I was forced to curb my enthusiasm. 35 years later, it seems my childish vision is closer to reality. The all-in production cost from a Solar Photo-Voltaic installation has dropped precipituosly: according to IRENA the global cost per kWh has declined 86% from about 37 cents per kWh in 2010 to about 5 cents per kWh in 2020. This progress was achieved a decade earlier than predicted. Solar is now cheaper than most other sources of energy. This is leading to a strong growth in the sector. Solar is expected to be the main source of power generating capacity starting in 2035 (see figure). 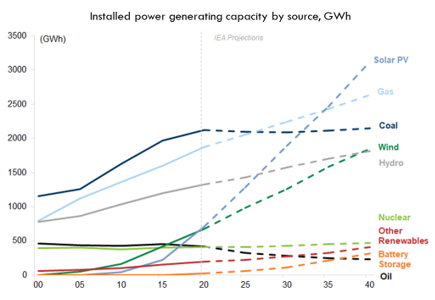 Solar still has the drawback of intermittent generating capacity: it only generates electricity when the sun is shinning. This needs to be addressed through improved battery capacity. Solar does, however, bring important advantages to both consumers and society as a whole:

The solar revolution will continue to open several investment opportunities. First, on the solar sector as a whole: equipment providers, service providers, solar operators and battery technology and equipment providers. Second, energy intensive industries benefitting from cheaper power. Finally, businesses that will be displaced by solar power emergence are strong short investment candidates. Somar is looking into all of these areas.